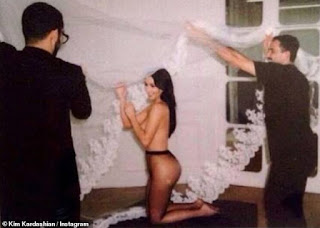 Kim Kardashian shared throwbacks of herself trying on her wedding dress after denying reports she was 'torn' about leaving her husband Kanye West.


The snaps were posted as part of Kim's 46th birthday tribute to fashion designer Riccardo Tisci, who was the brains behind her wedding dress when she married Kanye in Florence six years ago.
The 39-year-old included several pictures that showed the behind-the-scenes process of being decked out in her sumptuous white bridal gown.
Posted by Huvatex at 11:46 PM