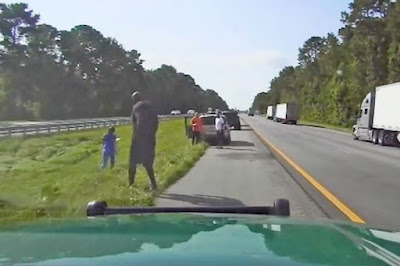 Shaquille O'Neal performed an act of kindness on Monday when he stopped on a Florida highway to help out a stranded driver whose tire blew out.

O'Neal, 48, was reportedly driving near Gainesville, Florida, on Monday when he saw the accident and pulled over to make sure everyone was okay. The NBA legend then stayed with the driver until authorities arrived on the scene.
"Yesterday, Shaquille O'Neal was traveling through Alachua County on I-75 when he witnessed a crash," Alachua County Sheriff's office said in a Facebook Statement Tuesday, sharing dashcam footage that showed O'Neal standing on the side of the highway.
"He stopped to check on the welfare of the driver and remained with her until law enforcement arrived," the statement said, adding that the athlete "fist bumped" the deputies who arrived before taking his leave.
Posted by Huvatex at 11:06 PM