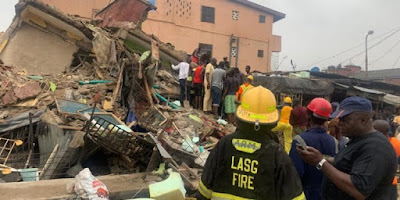 Police Constable attached to Ikoyi Division, Risikat Balogun and two children were yesterday killed while nine other persons were in critical condition after two buildings collapsed in Lagos. The incident occurred at 16 and 17 Freeman Street, Lagos Island around 2am.


Witnesses said a defective three-storey building was the first to cave-in, adding that it collapsed on a family sleeping inside a nearby bungalow killing a seven-year-old boy, Abdulsalam Balogun.
While some of the occupants including a pregnant woman were rescued before emergency workers arrived the scene, it was gathered that the unnamed Policewoman and a three-year-old boy identified as Paul were later brought out dead.
The policewoman, witnesses said, was found trapped near the exit of the building as she was apparently trying to escape when she got crushed by the structure.
According to residents, victims of the collapsed building recently moved into the neighbourhood as previous tenants were evicted on grounds that repairs were to be undertaken only for the new occupants to be brought in as renovation was ongoing.
Posted by Huvatex at 11:46 PM