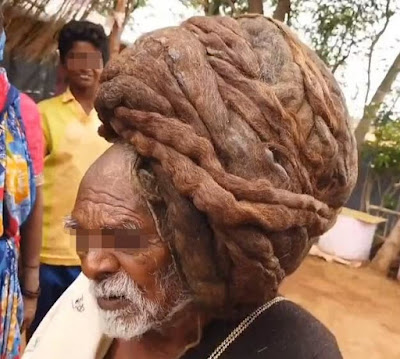 
Doddapalliah who is from India’s Karnataka state has to bundle his long hair into a huge and entangled ball on top his head and tie it with a cloth to help him move around.
At his age, his hair poses a hindrance to his movement but rather than cut it, he asks for help from people around to help him tie it.
He and many people in his home town of Molakalmuru, Chitradurga district consider him a human deity he hasn’t cut his hair in nearly a century for fear of losing his status as a human god.
Posted by Huvatex at 11:52 PM