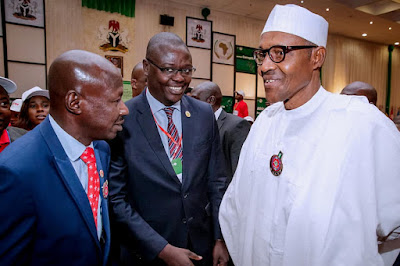 It seems that each day unfolds with new allegations against Ibrahim Magu as the Presidential Committee on Audit of Recovered Assets (PCARA) digs deeper into the ongoing probe.
According to a report released by the PCARA chaired by Ayo Salami, the recently suspended acting chairman of the Economic and Financial Crimes Commission (EFCC) used the senior pastor of Hand of God Prophetic Ministry, Emmanuel Omale, to purchase a property in Dubai with loot recovered in 2015,
Omale's name was said to have surfaced while the Nigeria Financial Intelligence Unit (NFIU) was carrying out its investigation. According to the NFIU's report, there was an illegal movement of funds to the tune of N573,228,040.41.
The report claimed: “Another individual who is helping in laundering funds for the Acting Chairman and who has been referred to in several petitions is one Pastor Emmanuel Omale (Hand of God Prophetic Ministry). “He is reported to have travelled to Dubai with Mr Magu and his name was used in purchasing property in Dubai for Mr Magu."
Posted by Huvatex at 11:48 PM