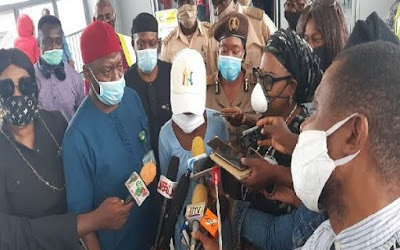 Three months after news of her ordeal in Lebanon reached Nigerians, sending shock waves across the country, 31 year old Temitope Ariwolo, was back home on Saturday relieved to be alive to tell the story all over
.

Temitope and 21 other Nigerians stranded in Lebanon were evacuated to Abuja by the federal government.
She was initially stopped from leaving for Nigeria  and subsequently charged for stealing and attempted murder of her employer after the story of her maltreatment was broken by Aljazeera television.
She was beaten by Mahmoud Zahran, the husband of her employer, Feyzeh Diab, on April 25 in their Choueifat residence, South of Beirut.
Savouring her  fresh freedom, Temitope  said: “I am happy being home. Going to Lebanon was like (going to) a hell.
“Nobody knows that will happen there. I advise other Nigerian  girls to stay here in Nigeria and try to make it, because going outside there was like hell for me, not only in Lebanon.
“What I experienced in Lebanon, I don’t even pray for Satan to experience.”
She spoke to reporters at the Nnamdi Azikiwe Airport, Abuja.
Posted by Huvatex at 11:49 PM