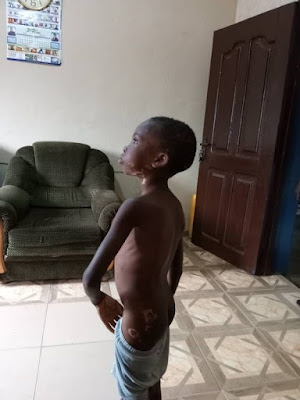 A 57-year old man, Joseph Akporugo and his wife Janet have been arrested by men of Ogun State police command for inflicting injuries on their 7-year-old grand-daughter.


The State Police Public Relations Officer, PPRO,  DSP Abimbola Oyeyemi, in a press statement hinted that the little girl (name withheld) had wounds all over her body when she walked into the house of a police constable living close to the couple in Awa-Ijebu.
He said the girl reported to the policeman about the maltreatment melted out to her by her grandfather and his wife whom she has been living with since the death of her biological father.
Posted by Huvatex at 11:52 PM