356 soldiers resign from Nigerian Army over loss of interest 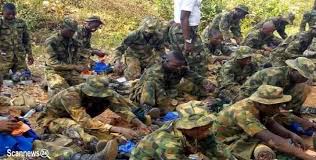 No fewer than 356 soldiers in the North-East and other theatres of operation have applied to the Chief of Army Staff, Lt Gen Tukur Buratai, for voluntary retirement, citing “loss of interest” as their reason for disengagement.


The soldiers wrote to the army chief on July 3, 2020, under Reference NA/COAS/001, quoting the Harmonised Terms and Conditions of Service soldiers/rating/airmen (Revised) 2017.

The approval of the voluntary disengagement of the 356 soldiers was contained in a 17-page circular from Buratai, AHQ DOAA/G1/300/92, signed by Brig Gen T.E. Gagariga for the army chief and obtained by Punch on Saturday.

Also, the document was copied to Headquarters, Theatre Command, Operation Lafiya Dole, Borno State, the Headquarters of 1, 2, 3, 4, 6, 7, 8, 81, and 82 Divisions of the Nigerian Army and other formations.