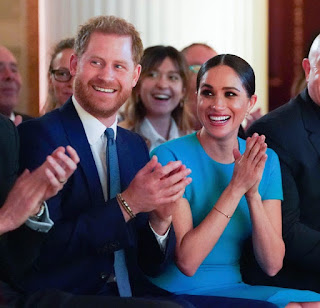 Prince Harry and Duchess Meghan of Sussex celebrate their second wedding anniversary Tuesday
. It has to be said that few would have predicted on that euphoric day of their nuptials at Windsor Castle that they would be living two years later in pandemic quarantine in Los Angeles, the hometown of the former Meghan Markle.

Far away in spirit and space from his royal family, they are locked in bitter legal wrangling with British tabloids while living in the capital of the paparazzi, seeking more "privacy." They have consciously uncoupled from their royal roles and are looking to begin an independent and lucrative life as a king and queen of Hollywood.
They were supposed to be the faces of the "modern monarchy," the glam couple who would combine his good-guy affect and royal heritage with her beauty, biracial background and celebrity American savvy to transform a fusty family firm into an institution more relatable to all citizens of the United Kingdom.