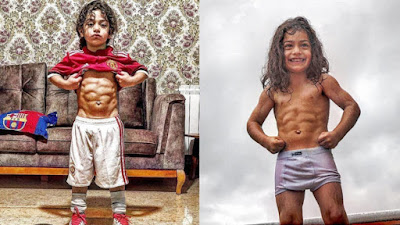 It is not every day you come across a 6-year-old with a ‘chiseled physique’ so it is understandable why internet users are stunned by Arat Hosseini.


Hosseini is considered an Instagram star, soccer prodigy or expert gymnast by many following him on Instagram.
He caught the public eye a couple of years ago when a video of what many originally assumed was a girl dribbling opponents on the soccer pitch went viral on social media. That ‘girl’ turned out to be a long, dark-haired Iranian boy whose father had been training to become an athlete since before he could walk.
When photos of his tiny six-pack abs and videos of his training routines went viral on social media, the young boy has since become an internet sensation.
It is reported that Hosseini’s father Mohammed started training him as a toddler as the boy started doing gymnastics since he was only 9-months-old.
By the time he was two-years-old, he had already appeared in international publications.
Posted by Huvatex at 11:46 PM